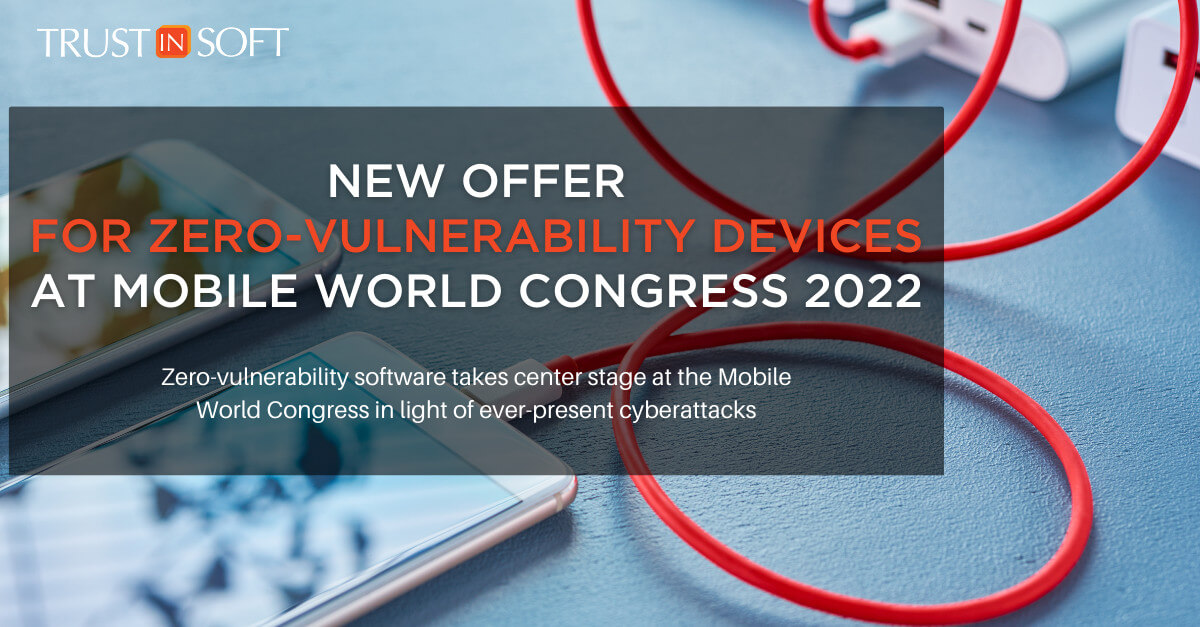 BARCELONA, Feb. 28th, 2022 – TrustInSoft, a cybersecurity software company, is showcasing its latest offer for zero-vulnerability devices at the Mobile World Congress (MWC), the premier mobile communications trade show taking place from February 28th to March 3rd in Barcelona. This year’s MWC comes on the heels of last summer’s revelations of the impact of Pegasus software’s alleged hacks, which exploit vulnerabilities in source code to take arbitrary control of devices.
The WhatsApp attack in 2018 that resulted from exploiting a buffer overflow in its source code is just one example of the vulnerabilities that malicious hackers can exploit in any device. There is no better line of defense than protecting software from the inside out by ensuring the security of its source code. TrustInSoft’s latest offer for zero-vulnerability embedded software and firmware provides assurance to developers that the low-level components used in their software are mathematically guaranteed vulnerability-free.
TrustInSoft Analyzer delivers bulletproof security to mobile and IoT devices, semiconductors, and any connected equipment by detecting critical code vulnerabilities early in the development cycle, and providing a mathematical guarantee on absence of undefined behaviors in the low-level software components. This latest application security testing (AST) tool relies on formal methods: powerful mathematical techniques that allow developers to prove source code immunity to code-based cyberattacks. TrustInSoft’s AST tool exhaustively detects 100% of undefined behaviors while cutting code verification costs by 4, revolutionizing the standard development and testing process.
TrustInSoft’s CEO Fabrice Derepas said, “Today’s world revolves around software, and we can do our part to protect devices and keep data from getting into the hands of the wrong people by ensuring device software security using the formal methods technology we have today.”
Visit TrustInSoft at the MWC in Hall 5, booth B41, or contact them at contact@trust-in-soft.com for more information.
About TrustInSoft
TrustInSoft participates in the Application Security Testing market alongside vendors such as Mathworks, Parasoft, Synopsys and Veracode. TrustInSoft Analyzer is a hybrid static and dynamic code analyzer that automates Formal Methods to mathematically guarantee C/C++ code quality, security and safety. TrustInSoft has customers worldwide in the automotive, IoT, telecom, semiconductor, aeronautics and defense industries. The company received awards and recognition from NIST, RSA and Linux Foundation. For more information, visit: https://trust-in-soft.com/
Press Contact
Ashley Zupkus
press@trust-in-soft.com