Software Trends, Risks, and Potential Rewards that Will Drive the Automotive Industry Over the Next Ten Years

This post is Part 1 of a 3-part series derived from TrustInSoft’s latest white paper, “On the Road to Zero-Bug Vehicles” To obtain a FREE copy, click here. 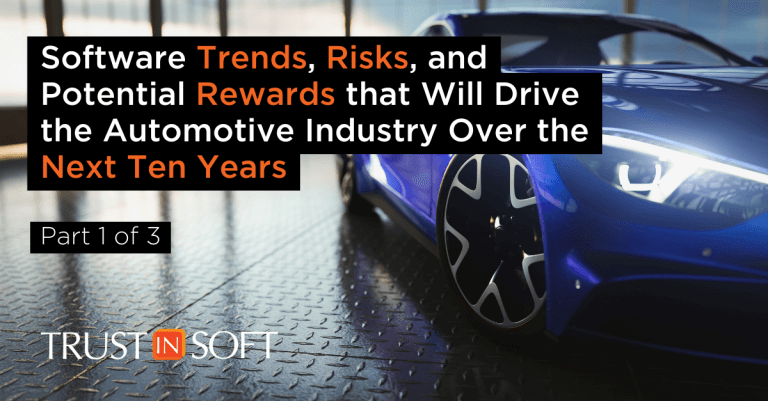 Over the next 10 years, expansion of the software and electrical/electronics market in the sector is expected to far outpace the automotive market as a whole. As a consequence, automotive companies and their executives have become focused on software and electronics. In their quest to realize that projected growth, however, they have to overcome several challenges.

The sector’s four biggest trends—autonomous vehicles, connectivity, powertrain electrification, and shared mobility—all rely heavily on software. Most automotive players, however, have to increase their productivity in software to meet the growth in volume and complexity and align with the industry’s software-development leaders. Areas of concern include agile practices, continuous integration, and automated testing.

A recent report by McKinsey and Company warns that as the landscape shifts, automakers who lack sufficient software capabilities will face major risks, including start-of-production delays and budget overruns. Those capabilities are key to stay ahead of competition and face new entrants who could bring more innovative products to market faster. Software issues could lead to massive recalls and leave companies vulnerable to customer-safety risks resulting from hacking attacks.[i]

In this post, we’ll look at the dominant trends that promise to shape the auto industry in the next decade. Then, we’ll dive deeper into one of those trends—one that will stress industry players and factor heavily in taking the lead in the sector over the coming ten years.

Software is now the primary driver of economic growth in the automotive industry.

According to McKinsey & Company, rapid expansion of the software and electrical/electronics market will result in a compound annual growth rate (CAGR) of 12 percent from 2020 to 2030. Areas of strongest growth include software functions (with a CAGR of 11 percent) as well as integration testing (12 percent). At this rate, the SW and E/E market is expected to vastly outpace growth in the overall automotive market, which is estimated to grow at 3 percent CAGR in the same period.[ii]

In the next ten years, software will become a strategic development area for the automotive sector. The continuous expansion of vehicle functionality—autonomous driving (AD), increased connectivity, electric powertrain management—is driven as much by SW as by HW, if not more so. This expansion will continue to transform the industry over the next decade.

The four dominant disruptors in the industry—AD, connectivity, powertrain electrification and shared mobility (known collectively as ACES)—are already mutually reinforcing this transformation, according to McKinsey, with further disruption still to come.

By 2030, AD SW alone—excluding advanced driver assistance systems (ADAS)—should represent more than a quarter of the market value and grow at an average yearly rate of over 20 percent until 2030. Elements like sensor fusion and environmental modeling will become more complex as AD-enabled vehicles will need to handle real-world situations.[iii]

Growing software complexity, however, will become a severe obstacle to productivity, if not managed properly.

Software complexity is a major concern

According to McKinsey’s research, software complexity grew by a factor of 4.0 over the past ten years, while software-development productivity increased by only a factor of 1.0 to 1.5.[v]

Today’s average car contains more than 100,000 million lines of code. That’s more than twice the code found in the Large Hadron Collider, and more than four times that of the world’s most complex fighter aircraft, the F-35.[vi] That code is often distributed across over a hundred microcontroller units, or MCUs, many of them interconnected. “Distributing 70 of the devices (MCUs) throughout the car is quite common these days, (and) better-appointed cars can have more than 100,” writes Bertel Schmitt on the automotive culture website, The Drive.[vii]

This trend is expected to continue for the next decade and beyond. As it does, it will stress industry players and force them to increase their software development productivity.

“Software maintenance alone will rapidly use up all software R&D resources if complexity continues to grow while productivity remains unchanged, leaving little room for innovation,” says McKinsey. “Ultimately, the complexity-productivity gap will reduce cost competitiveness and could lead to severe financial and reputational problems.” [viii]

Disparity in how organizations manage this growing complexity is creating wide gaps in competitiveness between industry players. “Organizations in the top quartile for software development achieve 3.0 times greater productivity compared with bottom-tier players, 3.5 times more throughput, and 6.0 times better quality,” reports McKinsey. “Consequently, their time to market is shorter and development costs are lower for each level of new software functionality.[ix]

Increasing software complexity and volume combined with demand for continuous feature updates will force OEMs to find and resolve coding errors as quickly as possible. Failing to do so, may create massive backlogs of bugs that overload their resources and complicate error tracing. This in turn would increase verification costs and cause development and delivery delays.

In our next post , we’ll examine five pressing challenges the automotive industry will need to overcome to realize the expected and necessary growth mentioned at the outset of this article.

If you don’t want to wait for the rest of the series, download our new white paper, “On the Road to Zero-Bug Vehicles” You can download your free copy here.

This post is Part 1 of a 3-part series derived from TrustInSoft’s latest white paper, “On the Road to Zero-Bug Vehicles” To obtain a FREE copy, click here.

[vii] Schmitt, Bertel, Flash! Armies of Microcontrollers in Our Cars Hunger for Memory, and Renesas Feeds Them, thedrive.com, June 2019.